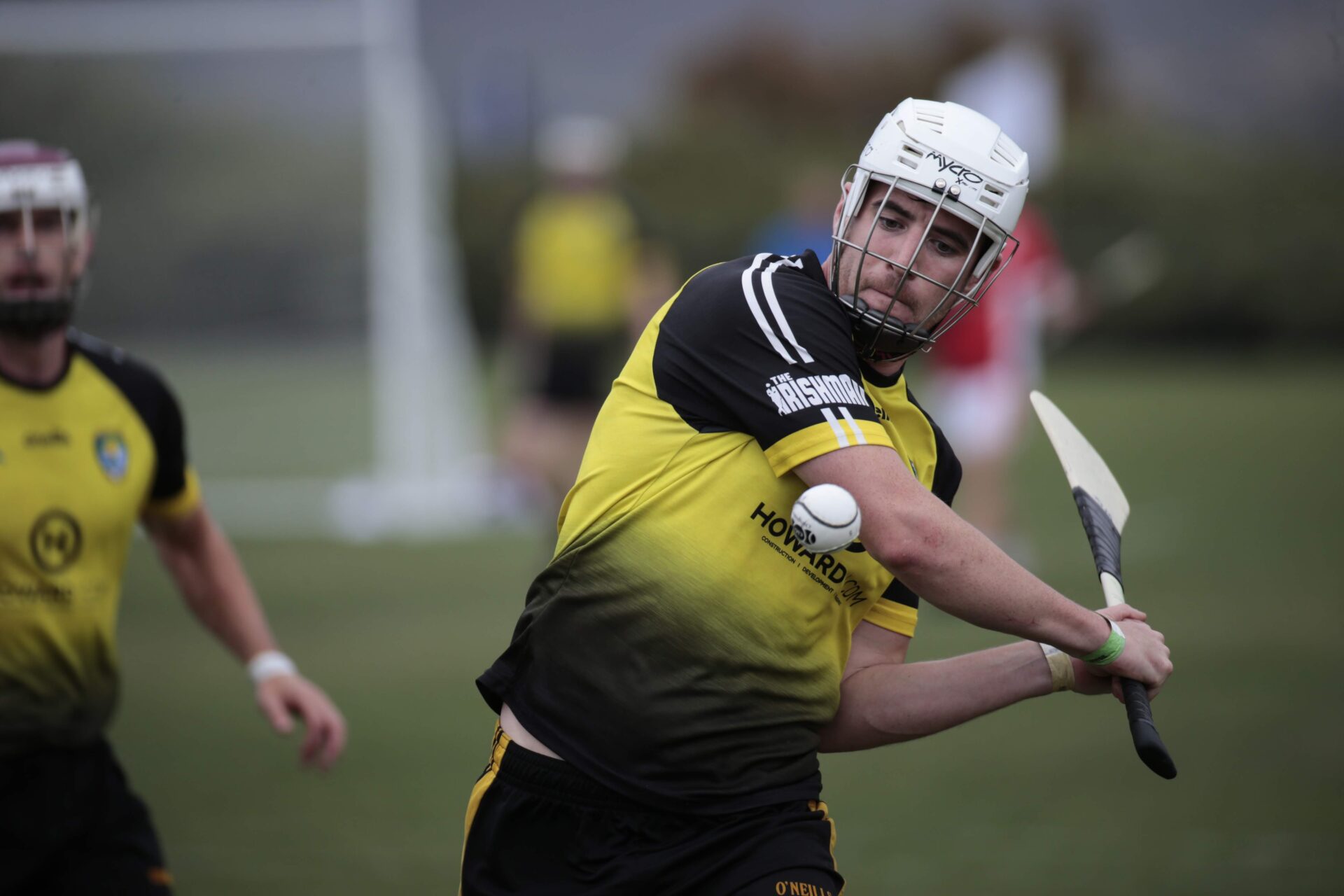 Hurling is the oldest sport known to man, but it’s new to many Americans. On this side of the pond, it’s the newest oldest sport. Many clubs throughout the United States have a long history built on Irish immigration, while some have American-born founders, who discovered the sport in Ireland and brought it to their city.

My name is David Wogan and I’m from Dublin. Since the age of six, I’ve been obsessed with hurling. I played hurling for Whitehall Colmcille up until I emigrated in 2011. For the past 5 years, I’ve made it my mission to promote hurling in North America through playhurling.com and on social media.

Through my growth efforts, I discovered just how many clubs there are across North America and the incredible potential this sport has on this side of the world. There is a hurling movement happening in the USA.

Why Hurling is the next big sport in America

Since hurling requires so many different skills, any athlete can find some facet of the game they are familiar with. Hurling features all the best qualities of American sports, such as agility, hand-eye coordination, striking the ball, but in one fast-paced game. For example, athletes who have played stick sports like lacrosse, baseball, and ice hockey make for great recruits, since they have foundational skills they could build upon in hurling.

Anytime I’m playing hurling in public, someone stops me to ask about it. People get excited about the game and often say, “How have I not heard of this sport before?”

But, many people have. There are over 160 North American hurling clubs. A number that surprised me at first, but as I’ve lived in the U.S., I’ve come to meet hundreds of eager hurlers and camogie players from across the country and from all walks of life. People who love the sport almost as much as I do.

Hurling is perfectly matched for the fast-paced American lifestyle. There is untapped potential of hurling in the USA and the sport can serve as a powerful way to spread Irish culture across the world. It is a sport steeped in Irish history and pride, that can be enjoyed and loved by all cultures.

What challenges do American clubs face?

The biggest challenge for any GAA club abroad is recruitment. We have a sport that is largely unknown beyond Irish shores, but is steadily growing with the help of social media. Getting the word out there is still a challenge. Especially with the capitalist nature of sports in the United States, GAA clubs are fighting for attention from these highly funded and advertised sports.

The obvious first step for growing a GAA club abroad is to target Irish communities. Often, this is the first step an Irish expat takes before moving – they’ll search online if there’s a GAA club in their area.

However, with increased pressures on U.S. immigration and less complicated visa routes for Irish people to immigrate to Canada and Australia, the number of Irish immigrants in America is at an all-time low. Many of my friends are currently experiencing visa struggles and this has prevented them from living in the US. I was in the same boat after my J-1 visa ended in 2012, I moved to Toronto, Canada, because I wanted to continue living in North America.

For the growth of Gaelic Games in America, this has created a new challenge: if there are only so many Irish people to go around, how will we field a team?

Recruiting beyond the Irish community has become a priority for many American clubs. As of this year, over 50% of USGAA members are American-born. This has just scratched the surface of the level of recruitment bootstrapped clubs can do with limited funding compared to highly funded American sporting leagues.

How to recruit Americans

Appearing familiar enough to locals, while maintaining the Irish culture within a club, can be a delicate balance. American sports rely on marketing/branding and many clubs across the U.S. have embraced this approach.

For recruitment, clubs must clearly appear open to players from all backgrounds. The Culver City Cougars from California are a great example of appearing local, while respecting the Irish heritage of the sports.

Their branding is perfectly matched to what you’d find at an American high school or college campus. They run Facebook ads promoting their club, share promotional videos of their team, and are generally very active on social media.

The club embrace their Irish culture and are very active in the Irish community in Los Angeles. But, their branding opens up recruitment to anyone from any cultural background and makes the advertising more about the sport and opens their club up to any talented athlete that would be interested.

Knoxville GAC’s founding story is one of my favourites! Their club was founded in 2014, when the Knoxville Army Reserve was looking for a form of alternative physical training. The coach, an Army Reserve Commander in Knoxville, saw a hurling match at Croke Park and thought to himself, “You know what, this is a warriors game, I think we can do this!”

During their drills, they would spend 2 hours playing hurling. To this day, half of the Knoxville GAC’s team is made up of that Army Reserve Unit and the rest of the team are Americans, who recently discovered the sport. They love and respect the game, preserving its Irish heritage, while also blending their American background into their club activities.

New Hampshire’s Wolves Hurling Club have a similar story to Knoxville GAC. The club’s founders are members of the U.S. Military. On their way home from a deployment to Iraq in 2005, they stopped briefly to refuel at Shannon Airport. They went to the airport lounge for food and a hurling match happened to be playing on TV. They were captivated with what they saw and were very curious to learn more. When they returned to U.S. soil, they decided to start up a hurling club and the rest is history.

Interestingly enough, I’ve seen a connection between hurling and those who are in the U.S. Army or U.S. Marines, which makes sense when you think about it. The brotherhood and camaraderie found in the Army and Marines is similar to that in hurling.

And it’s not just the U.S. military that are growing Gaelic Games, city clubs have started to expand into college campuses. In North Carolina, the GAA club at UNC Chapel Hill was started in 2013, when Raleigh Cú Chulainn was looking to expand to a local university. They recently hosted the NCGAA Collegiate Nationals in the beginning of 2019, where college clubs from across the country travelled to North Carolina to compete in the tournament.

Other examples of city clubs expanding into universities include Montana’s Grizzlies Hurling Club and South Carolina’s The Citadel.

The collegiate hurling community has created an inspiring model and one that I believe will be the biggest growth driver of hurling in America in the future. College campuses are a great place for recruiting because students are open minded to trying new sports, in great athletic shape, control their own schedule, and are looking to be a part of a community on campus where they can make friends. Also on U.S. campuses, there’s a great deal of campus pride. No matter what sport is playing, students from the university will show up to cheer on their college team.

Since it’s often difficult to find a full-size GAA field, new formats of hurling are emerging, to adjust to local pitch availability. 7-a-side tournaments like the West Coast Sevens in San Diego, and the newly formed New York GAA 7s, are so important in laying a future format for American hurling. The West Coast Sevens takes place in Southern California and is expanding every year. This past May, there were 44 teams from 23 clubs from the USA, Canada, and Ireland, including Kilmacud Crokes who flew over to San Diego for the tournament.

What’s the future of Hurling in America

There has never been a better time for hurling in the United States. Not only are the 161 clubs across the country continuously growing, but there is a trend and interest in unique sports other than the Big 4 American sports (i.e. baseball, basketball, American football, and ice-hockey).

The growth of lacrosse over the past 30 years from basic obscurity to becoming a televised sport, is proof that with the right determination and recruiting efforts that hurling could become a real powerhouse in America. Even more obscure sports, such as quidditch (from the book Harry Potter) and ultimate frisbee have grown exponentially in the past decade.

Hurling has a 3000-year foundation of sporting excellence. It amazes people when they see it and it takes an incredible amount of skill to play. Look at anyone who is watching hurling for the first time and it’s clear that the sport is unlike any other.

Over the past 8 years I’ve been in this continent, I’ve seen a strong passion for hurling from both the Irish abroad and people from all backgrounds. From people starting their own clubs in their city, to starting a club on their college campus, to growing an existing club, this community is hungry for growth.

We have this beautiful sport that the world needs to see. And it’s up to each one of us to promote hurling to the world.

If you’re moving to America or curious to see a list of North American clubs, make sure to check out Play Hurling’s club finder: https://playhurling.com/clubs

This article originally appeared in the tournament programme for the 47th Beacon Hospital All-Ireland Hurling 7s that took place on Saturday 17th August, 2019 in Dublin, Ireland.

Article Name
Hurling in the USA - Kilmacud All-Ireland Hurling 7s
Description
Hurling is the oldest sport known to man, but it’s new to many Americans. Read more about how hurling has seen rapid growth in the US over the past decade!
Author
David Wogan
Publisher Name
Play Hurling
Publisher Logo