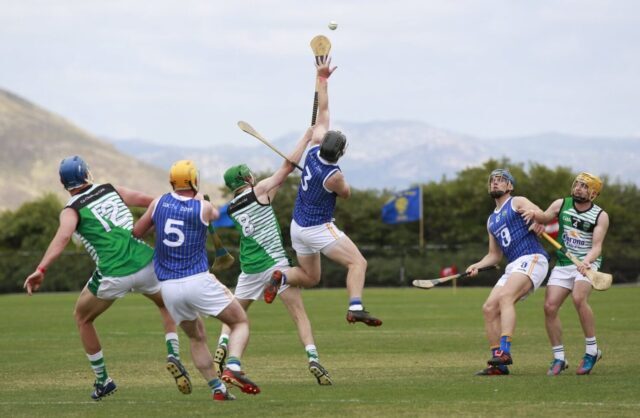 Hurling and the mythological story of Cú Chulainn are set to be featured on the CW’s Legends of the Hidden Temple in the next few weeks. We, at PlayHurling.com, were more than happy to provide hurling equipment to the show’s production team to make this episode happen.

The original Legends of the Hidden Temple was a beloved gameshow on Nickelodeon in the 1990’s and we’re thrilled to see it come back and feature the world’s greatest sport of all time. For those of you who are unfamiliar with Cú Chulainn, or even with hurling, here’s some background to help you better enjoy the episode.

Who was Cú Chulainn?

The Irish mythological story of Cú Chulainn (pronounced “Coo Cullan”) is a story about a child named Setanta who became a warrior through the practice of playing hurling.

At the age of 7, Setanta was invited to a feast at the fort of his uncle’s blacksmith named Culann. Setanta brought his hurl and ball (called a sliotar) to entertain himself along the journey. When he arrived late at Culann’s fort, the gates were locked. So, Setanta jumped over the wall and Culann’s guard dog began to attack him. Setanta responded with what he knew best using his hurl and sliotar to defend himself. As the vicious guard dog charged towards Setanta, he drove the sliotar accurately into the hound’s mouth and down his throat, killing him instantly.

The guests at the feast heard the commotion outside and expected to see Setanta’s dead body beside the hound. But to their surprise, it was the 7-year-old Setanta who had survived and killed the vicious animal. Setanta offered to perform the duties of the guard dog until a replacement hound was trained. From that day on, Setanta was known as the “Hound of Culann”, or “Cú Chulainn” (Source). He later became a warrior who fought for the Red Branch Knights.

The story was passed down from generation to generation by word-of-mouth only, until it was documented 800 years ago in the long-form poem Tain Bo Cuailgne (“the driving-off of cows of Cooley”).

Why is the sport of hurling associated with Cú Chulainn?

Hurling is a 3,000-year-old Irish sport and is known as “the warrior’s game”. Historically, hurling was used to train warriors for battle. In some cases, a hurling match was even used as an alternative to battle, where the victor of the hurling match would take all.

In the story of Cú Chulainn, Setanta’s uncle, King Conor Mac Nessa, set up a school to train young boys to fight in the king’s boys army, called the Macra. The Macra was the first step towards becoming a Red Branch Knight. Hurling was used in the king’s training programme to teach the kids agility, skill, and speed.

The story highlights the warrior-like nature of hurling as a sport and the positive impact the sport has on its players. Cú Chulainn’s love of hurling helps him grow into the hero and warrior he was destined to be. His story is an inspiration for children and adults alike who also feel like hurling has transformed their lives and instilled them with bravery.

There are many hurling teams around the world that are named after Cú Chulainn:

Hurling is Ireland’s National Sport, but it is also played internationally. It is a fast-paced stick sport, played on a grassy field between two teams with fifteen players either side. To learn more about the sport of hurling, see What is Hurling.

There are 170+ hurling teams in the US and Canada, with new clubs popping up all over North America.

Find a Club Near You
Shop Hurling Equipment

David WoganDavid Wogan created Play Hurling in 2014 with one core mission: to get more people out playing hurling. He makes monthly hurling news videos on his YouTube channel documenting the progress of North American Hurling and Camogie clubs. He currently lives in Los Angeles and plays hurling for the OC Wild Geese.
Posted in:
What Is Hurling
Product categories
Recent Posts
Fast Shipping